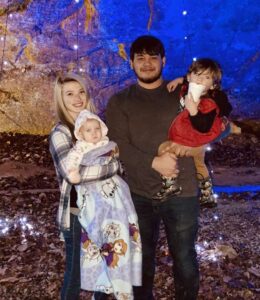 Mizael Gapi, 20, of West Union, Ohio passed away on Thursday August 11, 2022 at The Ohio State University Wexner Medical Center in Columbus. He was born December 6, 2001 in Wilmington. He is preceded by one son, Branson Gapi; grandfathers: Ronny Stone, David Robinson and Fidel Gapi; one uncle, Jason Robinson and one great aunt, Angela Baker.

There are many wonderful things about Mizael.  He touched so many lives in so many ways.  He will be remembered as a son, husband, father, brother, uncle, cousin and outdoorsman. He loved God, he held onto his faith and always trusted the lord to answer his prayers. He made our lives a little more special.  In these times our family is going through so many emotions.  The gift of Mizael’s life is in our memories and stories.  He is a part of who we are today.  So today, tomorrow, and many years to come please share those memories and stories to keep the gift of Mizael’s life alive.

In Lieu of flowers please make memorial donations can be made to:

Robin Lucas - Aug 20, 2022
Mizael was a troubled young man but I really liked him. He was always so pleasant and respectful to my family. Mizael had a God given sports talent. Although he didn’t know it, I tried so hard to work with his principals to keep him in sports. God rest his soul and look after his wife and children. 😢