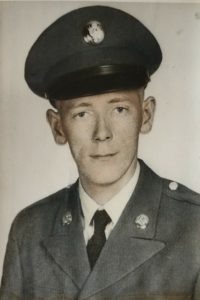 He was a farmer and was employed at McClanahan Farms and Kirker Farms, both in Liberty Township in Adams County.

He was a U.S. Army Veteran and served in Vietnam.

Memorial donations can be made to Lafferty Funeral Home Incorporated,

The private visitation is Wednesday, April 1, 2020 at Lafferty Funeral Home in West Union.

The funeral and interment are Thursday, April 2, 2020 at 2 PM at West Union Village Cemetery.  Pastor Chester Whaley will officiate. The Adams County Honor Guard will perform a military service.

Robert Cooper - Jan 7, 2021
Rest in peace, grandpa. I've lost touch with my father and didn't hear of your passing until now. I'll miss you always. You were the kindest and hardest working man I knew. Family and country meant everything to you. I love you and I'm proud to have known you.
Gary Rawlins - Mar 31, 2020
RIP Uncle Larry.
mark Brewer - Mar 30, 2020
Mr. Grooms was such a great guy and good neighbor, he will be missed
Donna Glenn - Mar 30, 2020
Love you Uncle Larry, Rest In Peace