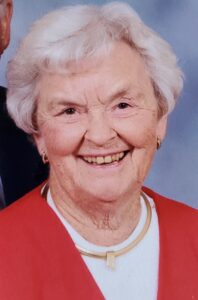 Following graduation from West Union High School in 1941, she was employed at Allis-Chalmers in Cincinnati where she proudly worked as a Rosie Riveter.

After Chet’s military service, they returned to West Union where they owned and operated K & H Hardware, later known as C. Kendall Hardware, and Richard’s Monument Company on Cross Street. In the 50’s, she worked in the Adams County Selective Service Office.

Phillip and Vicki Rhonemus - Jun 20, 2020
Dear Kendall Families, Keeping each of you in our thoughts and prayers at this time. June always was gracious at the Presbyterian church and in the community. She was also a great host for events for the junior choir, 4-H, and Women's Club. She will be missed. Sincerely,
John T and Elaine Lafferty - Jun 19, 2020
Sympathy for June's family
Jed - Jun 19, 2020
Sorry for your loss