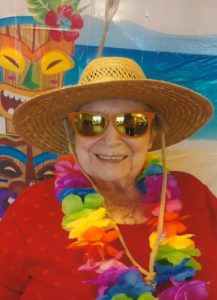 Libby retired from the First National Bank of South Carolina after 18 years of service. She worked as a clerk for the U.S. State Department – Foreign Service in San Nicolaas, Aruba and also worked as a party organizer for the U.S.O. She was a member of the Grace Fellowship Church in Peebles, Ohio.

Libby was proud of her heritage.  Her great, great grandmother was the sister of Kit Carson. One grandfather rode for the Pony Express, and her geat grandfather was the woodcarver to the King of Sweden.

A Visitation will be held at the Grace Fellowship Church in Peebles on Friday, November 23, 2018 from 4 until 5:30 pm with a Memorial Service following until 6 pm.