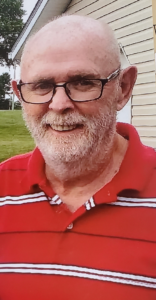 Walter Joel Yeager, Jr., age 77 of West Union, Ohio, died Thursday, May 28, 2020 at Adams County Manor.  He was born December 18, 1942 in Sharon, Pennsylvania.  He was preceded in death by parents, Walter Joel Yeager Sr. and Catherine Yeager and one son, Scott Yeager.

He was an Industrial Electrician for Dayton Power and Light (D.P. & L.), at the Stuart Plant and Killen Plant in Adams County for 30 years.  He was a former employee of U.S.E.C. in Portsmouth and K25 in Oakridge, Tennessee.

He is a United States Army Veteran and served during the Vietnam Era.

The funeral service is at 7 pm, Wednesday, June 3, 2020. The Adams County Honor Guard will perform a military service outside Lafferty Funeral Home.

Walter will be cremated following the service.

Phillip and Vicki Rhonemus - Jun 20, 2020
Dear Yeager Family, Continuing to keep you in our thoughts and prayers at this time. I appreciated Walt's time with area athletics and as a fan of West Union basketball when I attended/officiated games! Sincerely,