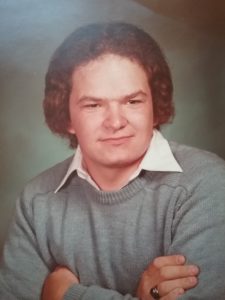 Terry L. Scott, 51, of Manchester, Ohio passed away on Friday, May 17, 2019 at the Hospice of Hope Ohio Valley Inpatient Unit in Seaman, Ohio. He was born January 4, 1968 in West Union, Ohio to the late Charles and Phyllis (Adams) Scott. Besides his parents, he was preceded in death by his sister, Barbara Scott.

Terry was a 1986 graduate of West Union High School.  He was a machinist for 24 years at Emerson Manufacturing in Erlanger and Maysville, Kentucky. He enjoyed fishing and hunting when he was younger. Family was everything to him. Terry’s biggest enjoyment in life was watching his nieces and nephews grow and play.

The visitation is from 11 am – 1 pm Friday, May 24, 2019 at the Lafferty Funeral Home in West Union. The funeral will follow at 1 pm with Pastor Terry Whaley officiating. Burial will be at the West Union Cemetery in West Union.

Phillip and Vicki Rhonemus - May 24, 2019
Dear Scott and Reeves Families, Keeping all of you in our thoughts and prayers at this time. Sincerely,
Anita Smothers - May 22, 2019
My Deepest Condolences to all the Scott & Reeves family. You all are in my thoughts & prayers.
Crystal - May 21, 2019
So sorry to hear about the Loss of Terry he was such a good person, thoughts and prayers to the family❤
Rhonda henderson - May 20, 2019
Sorry to hear this terry was a good person