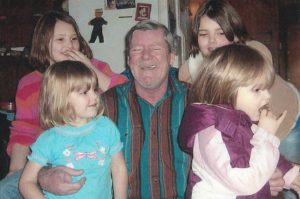 The visitation is from 11 am until 1 pm on Friday, December 7, 2018 at Lafferty Funeral Home in West Union. The funeral will follow at 1 pm

with Pastor Tommy Brown officiating. Burial will be at Kirker Cemetery in Liberty Township in Adams County.

Lafferty Funeral Home in West Union is serving the family.

Joni - Dec 6, 2018
I remember Sam and Robert when we were kids. They were neighbors of mine. Sorry for the loss of your dad.
Lisa highfield - Dec 5, 2018
I have known Sam for a few years because my mom was married to his brother terry and he was a funny and wonderful man it’s just hard to beleave he is gone . We will miss him so much prayers sent to patty and family ..