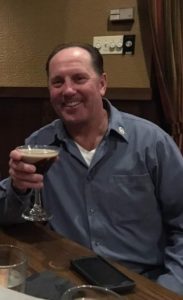 Michael Heise, 58, of Jefferson, Colorado died Tuesday January 21, 2020 (due to complications of asthma) at his residence.   He was born April 18, 1961 in Chicago, Illinois.  He was preceded in death by his parents, Harry “Bucky” and Norma (Schmidt) Heise; three sons: Michael Anthony, Nicholas Michael and William Heise, and best friend Tony Schiavo.

Memorial donations can be made to the Colorado Fallen Heroes Foundation, P.O. Box 470341, Aurora, Colorado 80047.  http://www.COFallenhero.org

The funeral service is Friday at 2 pm at Lafferty Funeral Home.  Bill Cooper will officiate.

The interment is at Cherry Fork Cemetery.

Mark Schmidt - Jan 31, 2020
Our family is truly saddened by Michael's passing. Our sincere condolences to his famiy. I will always have fond memories of trips to Norma and Buck's house and us kids getting to go to Wrigley and be 'bleacher bums' for a dollar. After Hurricane Harvey hit us in Houston Mike called and said he wanted to come and volunteer to help demo homes of our officers who had been flooded. He was a huge help to several of our officers during his stay with us. His upbeat and caring attitude was a blessing and appreciated by many. We will always be thankful for being blessed with the time we had with Mike and will keep him in our hearts forever. Mark S.
Dora Tina Heise-Kropifko - Jan 28, 2020
My prayers are with you . Michael having transitioned from this life to his next life and to join his family and friends on the other side. Remembering the good times.