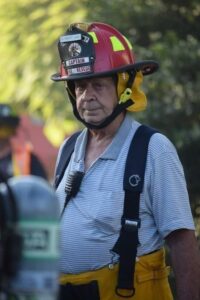 John has been a Fire Fighter since 1970.  He was the Captain at Monroe/Manchester Fire Department and E.M.S.  He was a former truck driver for Jones Trucking in West Union.  He was a former tow truck operator for Richard Huntley’s Towing Company.

TIM M CAUDILL - Nov 13, 2021
WE HAVE LOSS A GREAT PRESON ,FRIEND,FAMILY MAN ,GO REST HIGH BROTHER ON THAT MOUNTAIN ,NOW YOU CAN PLAY YOU GUTAR AND SING FOREVER MORE ,SO SORRY TO ALL YOUR FAMILY FOR YOUR LOSS ,MY THE ANGLES COMFORT YOU ALL.
Dorothy Williams - Nov 10, 2021
You were a good friend to my family. You and Roger played a lot of music together when he was alive.
Carey (Fee) - Nov 9, 2021
Rip Jonny. You was a great man of which I knew most of my life. Our families were very close. I miss your Mom Laura too. Now you can rejoice in heaven. Till we meet again old friend. Gone but never forgotten
Chester whaley - Nov 9, 2021
John was a verry nice man he sure will be missed I knew him since I was a little boy always had a smile on his fade didn’t let anything drag him down but when his wife passed part of him left all I can say I enjoyed him while he was still here and I will miss his singing pray for the family