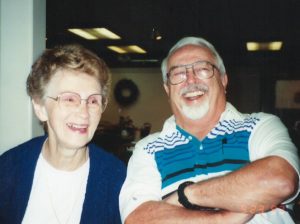 Gladys R. Stultz, 92, of West Union, Ohio passed away on Tuesday, September 10, 2019 at her home. She was born June 17, 1927 in Marion, Ohio to the late Reverend R.L. and Elsie (Wallace) Reynolds. Besides her parents, she was preceded in death by her husband, Richard Stultz; children, James Stultz, Sara (Stultz) White and Stephan Stultz; grandson, Jeffrey Johnson, and brothers, Richard, Bobbie and Byron Reynolds.

In lieu of flowers, memorial contributions may be made to the West Union Presbyterian Church, 110 S. Second Street, West Union, Ohio 45693.

The visitation is from 5 until 7 pm on Friday, September 13, 2019 at Lafferty Funeral Home in West Union. The funeral is Saturday, September 14, 2019 at the West Union Presbyterian Church at 12 noon, with visitation from 11 am until time of service. Reverend David Sugarbaker will officiate. Burial will be at Kirker Cemetery in Liberty Township near West Union.