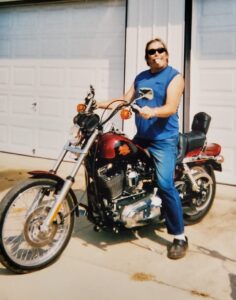 Ernest served in the U.S. Navy on Midway Island during the Vietnam War.  After his time in the military, he worked for Texas Eastern Pipeline Company for many years.  He was an avid coin and gun collector.  He enjoyed hunting and riding his Harley Davidson Motorcycle.

A Grandson’s Goodbye: “My Hero passed away; I knew I needed to go see you yesterday pops; something told me too. Now, just 9 hours after I kissed you on the forehead and told you I loved you, you’re gone, just like that, and Idk how to handle it, or if I’ll ever be the same man again.

I promise I’ll talk to you every single day; I love you so very much; thank you papaw, for being my dad, for being my teacher, my best bud, and my absolute hero; I’d be blessed to become just a third of the great man you were. You finally got the peace you deserved.  Goodbye now; you wonderful, wonderful man. Goodbye”

Michelle - Apr 5, 2021
Goodbye Dad, you fought hard and you fought a long battle. Rest now. I sure hope they have coin shops in heaven. Love always, Sis.